P is for Pandamonium 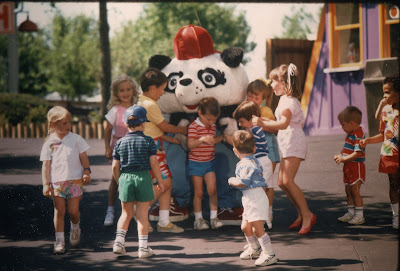 About two months ago we went back to 1978, to look at the first expansion into the world that today, 2011 we now call Planet Snoopy. Then it was known as Aerodrome. 9 years later, in 1987 it would make its second transition from the flight oriented, Aerodrome, to kid friendly Pandamonium! 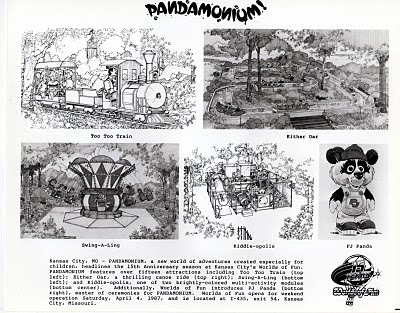 Pandamonium opened the same year Worlds of Fun celebrated its 15th Anniversary.
It wasn't to be Worlds of Fun's most costly addition, it wouldn't even cost even half of what Planet Snoopy today is costing the park. Only $1.5 million in 1987 dollars, that's roughly $3 million in today's dollars. It would add four new rides, Too Too Train (still there as Woodstock's Express), Turn Tyke (still there), Swing-A-Ling (still there as Charlie Brown's Wind-up) and Either Oar (removed in 2001 for the addition of Camp Snoopy). 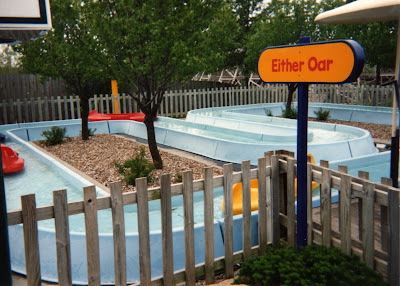 Either Oar, a staple at Pandamonium and then Bear Country. It was removed when Camp Snoopy was added in 2001. As an added addition, this ride was an absolute pain in the posterior to work in the hot summer months as those stupid plastic boats leaked! 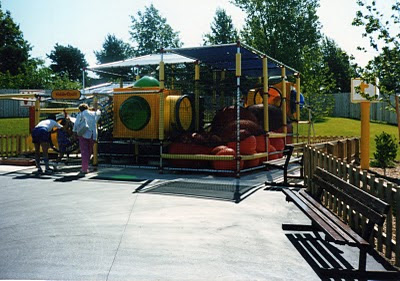 Ah Kiddieopolis. It didn't last very long as you might be able to figure. But it was great fun while it lasted. My favorite part? The giant plastic balls you had to "try" to walk across. Emphasis on the TRY.
Pandamonium shoudn't be confused as the parks first kids area, that tribute goes to Humpty's Haven in Scandinavia. In fact at the time, not every kids ride was migrated immediately to Pandamonium, but most did. Notably Viking Veel (Head over Wheels) and Tot's Yachts made the move over. However, Micro Moto Bahn, one of the two rides removed permanently at the end of the 2010 season, stayed in Scandinavia until 1997! 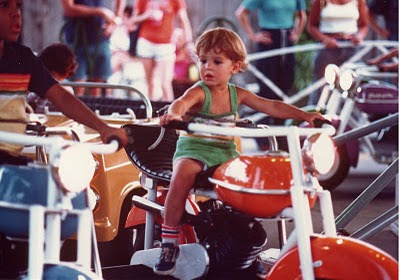 Micro Moto Bahn in Scandinavia. In 1997, it was moved to Kiddy Kingdom & Bearenstain Bear Country were it became Road Rally. It was removed at the end of the 2010 season.

Though I have been fascinated for quite a long time (over 15 years now) with all of Worlds of Fun's history, Pandamonium and the years that surrounded its addition are the most special and memorable for me personally. I was there the year Pandamonium opened as a 10 year old. And just like today I awaited the newest Worlds of Fun commercials of the year. When Pandamonium was announced I went about, in my 10 year old way, trying to recreated PJ Panda's costume... it didn't work out so well. But it proves even then, 10 years old I was already hooked.

So what was Pandamonium like all those years ago? Really what was the PARK like all those years ago? Girls of those days came in dressed in the 1980's style sundress, thirsty kids down'd one of the park's many Soda Sippers, usually themed after one of the park's mascots (though the juice itself really didn't taste that great we all wanted the bottle!), and at the end of the day, most of us all left with one of those famous tissue paper flowers. 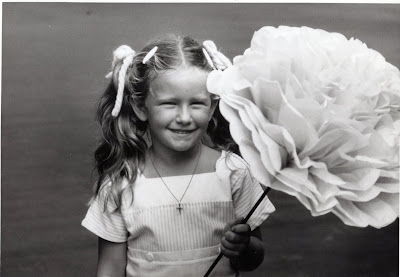 No this isn't me, but its about as close as it will ever get. Curly hair, barrettes, sundress, paper flower and all. :)
Rainbow Brite stared in her own show at the Panda Pavilion, newly renamed but basically the same structure as the Flying Circus theater. Rainbow Brite was the BIG thing back then, but how dorky and 80's she is, looking back now!

I had a sudden realization after posting this blog that a lot of people have NO idea who Rainbow Brite is. Yep, mid-80's saturday morning cartoon star.
Just the following year in 1988, the Rainbow Pavilion, became the Cabbage Patch Playhouse, and for the next four years after that, the Pavilion was home to a meet and greet show with PJ Panda, and the other Worlds of Fun mascots (Sam Panda, Daniel Coon, etc). Think like Campground Karaoke at Camp Snoopy. 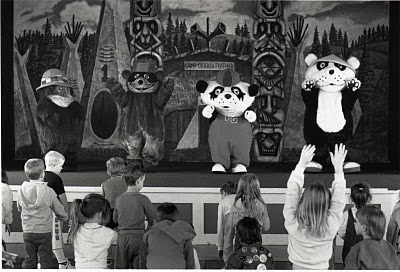 Sam, PJ, Daniel and an unusually short Gertrude get down with the kiddies at Panda Pavilion

PJ Panda was the new mascot for Pandamonium. A pint sized version of the older Sam Panda. From newspaper articles of the time, PJ panda was pint-sized to be less scary for the younger visitors to the park.

Unlike Planet Snoopy today where quite literally the entire section is being bulldozed and rebuilt from the bottom up. Pandamonium basically built on the Aerodrome's existing structures, and bumped the section out a bit land-wise to fit in the six new arrivals. (two existing rides and four new rides). Yes, Pandamonium boundary's extended all the way down to near the Forum... This is where Detonator is now. Back in 1987 it was home to one of Pandamonium's relocated rides the Viking Veel/Head over Wheel.
As previously mentioned the Flying Circus Theater became the Panda Pavilion. Lucky Lindy's Lunch Counter became Kid's Stuff. Its iconic airfield tower? Re-themed to include brightly colored alphabet letters.

Amazingly as a friend of mine pointed out the nearby airfield themed bathroom stayed looking exactly the same, just as it does today even. So that 35 years later, one last vestige of the Aerodrome still remains.

The irresistibly cute Cockpit Coolers? Became Soda Sipper... serving what else? Soda sippers! Man I wish I had a photo of one of those. Talk about child-centered advertising at their best. If I remember right they were still around until the mid-90's? 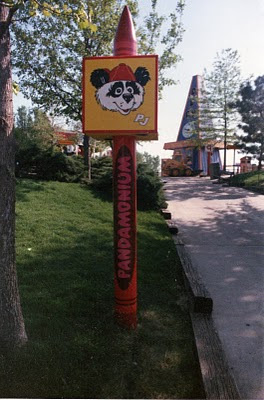 One of the quintessential over-sized crayon decorations. In the background is Soda Sipper. Previously known as Cockpit Coolers.
Three existing major attractions would also stay, and two would become classics in their own ways. Tailspinner stayed on to be called Octopus once again. It sported several different color scheme's over the years... from the tried and true Worlds of Fun colors (pink, purple, lime green, etc), to its famous... or should I say infamous tomato plant color scheme. 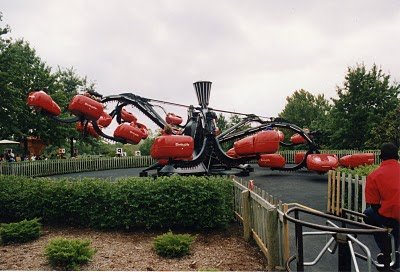 Red Baron, the kiddie airplane ride located, it seems eternally, at the entrance to every new area variation, was given its second new name, PandAm Airlines. For those born in later years, the name gives credit to the popular airline at the time PanAm Airlines. Incred-O-Dome also stayed on, and would last until 1997. Incred-O-Dome lived out its useful lifespan, and had gone from state of the art, to a relic of the past when it was removed. We all have wonderful memories of it though! 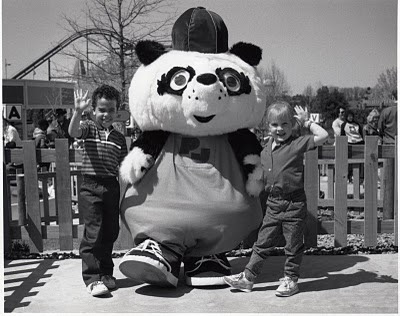 PJ Panda, and you can even see the Panda Pavilion and Screamroller in the background!

Pandamonium would be with us for years to come, it had a cute and simple theme that wasn't directed at any specific commercial character (nothing against Snoopy), building blocks, giant crayons and bright colors, including the brightly painted light poles were characteristic of Pandamonium!

Unfortunately, its minimal infrastructure additions really hurt the area. In fact it seems the idea of a fresh coat of paint, instead of a whole overall overhaul seemed to trickle from Pandamonium down into the rest of the park, to cause the major demolitions that we would see about a decade later. In fact, I think its almost safe to say that this one small area in the park, throughout its various changes is almost a direct reflection of the future of the park at that time. 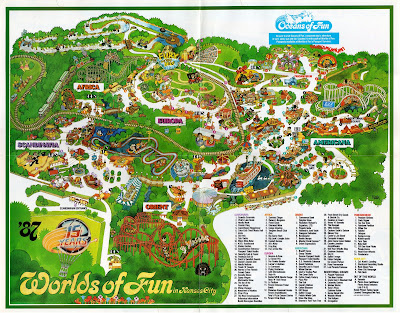 The REAL reason this blog update was delayed... The 1987 map. One "interesting" point is the almost overkill advertising of ride sponsorships. Maybe its just me but Mazda Orient Express? That just strikes me as odd. If you look at Pandamonium you will also notice that it appears the designers of the 1996 souvenir map probably took a page from the 1987 map. Pandamonium NEVER looked as interesting in real life as it did on the map.

One thing is true though in1997 Pandamonium's long run came to an end. Prompted by the purchase and change of ownership of the park to the Cedar Fair chain, the by that time dated Pandamonium would make way for the short lived Bearenstain Bear Country.

We will hopefully get a chance to look at it and Camp Snoopy one last time soon!

Check out more photos and discuss at WorldsofFun.org's Facebook site!
Posted by Jennifer at 6:16 PM

Great entry! I never realized how a midway had to be moved to accomadate Detonator. I always love to learn more about WOF.

The Incred-O-Dome,however, was closed at the end of the 1997 season. Scrambler was moved there so the Octopus could be introduced in Scandinavia.

Todd your right 1997 not 2001, I will correct that. All of these things start running together after awhile!

I shall forever bow to your greatness Jennifer. I had very vague memories of Aerodrome (My first WOF was in '84, Aerodrome ended in '86), and I had adored pandamonium, though memories have faded over the years.

These photos are awesome Jennifer, and I plan to try to make a return to this area for the 2011 season (I have a nephew now that needs to start thrill seeker training) to see planet snoopy. I miss pandamonium, and also the pad that held barnstormer/tailspinner. I can NEVER emphasize how ideal that pad is for an actual RIDE.

Jennifer, would you happen to be able to find the old WOF commercials from 1987 or 1988 where the group of kids run up and hug pj panda? I believe it's a Pandemonium commercial. Thanks in advance!